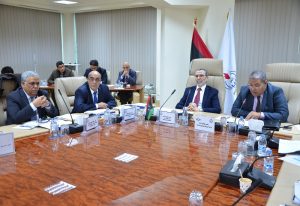 Mustafa Sanalla, chairman of the NOC, has accused the Western PFG of conspiring with fuel smugglers (Photo: NOC).

Mustafa Sanalla, the chairman of the National Oil Corporation (NOC) has accused the Western Division of the Petroleum Facilities Guards (PFG) of ‘‘complicity’’ with fuel smugglers. The PFG are the official state security body charged with protecting Libya’s oil installations.

Sanalla was speaking during the AGM of Brega Marketing Company on Sunday. Brega is the marketing and distribution arm of the NOC charged with distributing – and importing where necessary, fuels, oils and cooking gas.

The NOC chairman reviewed some of the problems faced by Brega during the year, including the reduction in the company’s storage capacity as a result of the severe damage that its storage tanks had suffered. He was referring to the fact that Brega’s Tripoli Fuel Depot on Airport road was badly damaged during the 2014 Tripoli militia war when a number of storage tanks were destroyed. 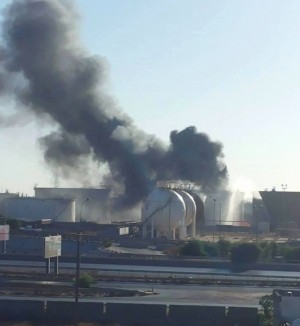 Brega’s fuel tank depot at Airport road was attacked during the militia war of 2014 (social media).

The reduction in Brega’s storage capacity has relevance to recent petrol queues at Tripoli’s petrol stations. Brega was forced to dock an oil tanker at Tripoli port in order to supply petrol stations through a fleet of fuel transporters.

Sanalla also referred to the recent shortage in cooking gas cylinders and stressed the need to solve the distribution problems. He emphasized the need for stable supplies and distribution of fuel and gas to all areas of Libya.

On the ever-increasing phenomenon of fuel-smuggling, Sanalla referred to its role in the embezzlement of public funds during the current difficult times Libya was going through.

He said that there is a need to prioritize urgent and decisive actions against the organized crime of fuel-smuggling. The NOC, he added, had provided all relevant parties, nationally and internationally, with all available information on fuel smuggling. Besides Tunisia, the international reference is to alleged fuel smuggling by sea to Malta.

The NOC chairman expressed his solidarity with the NOC’s Anti-Smuggling Committee and all Brega staff in face of the intimidation and security risks that they face from fuel smuggling gangs.

Fuel smuggling is linked to criminal activity, migrant smuggling. arms and drugs trade as well as the empowering of some of Libya’s armed militias. It is also acting as a drain on fuel supplies and the state’s coffers.