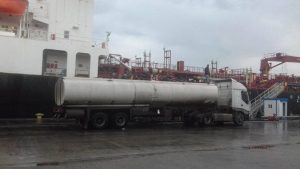 Winter weather in the Greater Tripoli area has contributed to petrol and cooking gas cylinder queues in the capital over the last three days, which has been compounded by near total power blackouts in most parts of the city.

The recent fall in temperature and increased use of air conditions and heaters has increased demand for electricity compounding the length of power cuts in the beleaguered capital.

The NOC’s BREGA fuel distribution Emergency Committee assured that there is no fuel or cooking gas shortage and urged the public not to panic buy. They urged the public to ignore all the rumours, such as that petrol prices will rise in January from LD 0.15 to LD 1.00.

They blamed the fuel delivery delay on the bad seas preventing oil tankers from offloading at Zawia refinery and the inability of Misrata depot to provide supplies due to the closure of the coastal road at Gaser Al-Kheyar.

To mitigate this, the fuel distribution company has docked the oil tanker Anwar Al Naser at Tripoli port, which has been quickly discharging its fuel to all of Tripoli’s petrol station. The coastal road has also been reopened. BREGA forecast that the fuel crisis will be over by today. It reported that some petrol stations received as much as 120,000 litres. Gas cylinder filling and distribution was also increased. 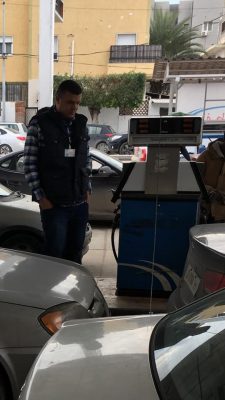 Petrol stations were still operating in Tripoli today despite a near total power blackout thanks to power generators (Photo: BREGA).

On a positive note, BREGA reported that all of Tripoli’s petrol stations remained operational over the last two days thanks to their power generators despite ‘‘an almost total power blackout’’ in Tripoli.

It will be recalled that BREGA’s Emergency Committee had announced at the end of December that all of Tripoli’s petrol stations had been fitted with power generators and CCTV cameras.

The move was taken to help mitigate fuel and cooking gas shortages which were often criminally or politically instigated post the 2011 revolution.

The Committee had said that the measure, which it has been working on for a few years now, was in order to counter the debilitating effects of power cuts on ‘’most areas of the capital for long periods’’.

BREGA also reported that it had over the last three days monitored petrol stations and put in place ‘‘deterrents’’ to ensure they all remained open as required.