The National Oil Corporation (NOC) chairman, Mustafa Sanalla, has intensified his attack on fuel smugglers and the smuggling of state-subsidized goods in general in his latest statement on the topic.

Further to his attack on fuel smugglers and his singling out of the Western Petroleum Facilities Guards (PFG) at the Brega Marketing Company AGM on Sunday, Sanalla took the unprecedented step of actually publicly naming the Western PFG head.

In his opening speech at yesterday’s AGM of Zawia Refinery Company, Sanalla went a step further in publicly naming Mohamed Kashlaf (aka Alqasab) the head of the Western PFG.

Sanalla opened with a condemnation of media reports of the outcome of a meeting between a number of municipalities in western Libya, civil society institutions and officials from the Tunisia border town of Ben Guerdane.

He condemned the reported recommendations of this meeting as an attempt to legitimize smuggling and as a relinquishment of the rights of the Libyan State.

The National Petroleum Corporation emphatically rejects this, the NOC reported, adding that he invited municipalities to focus on combating smuggling within their administrative borders in order to alleviate the suffering of its citizens because of the fuel crisis and due to smuggling in order to preserve public funds. 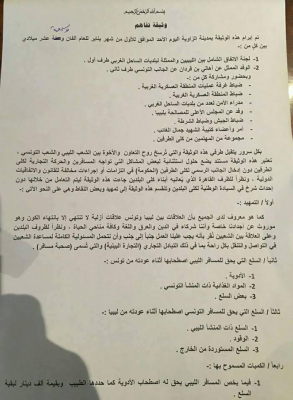 The agreement referred to by Sannalla prescribes that Libyan travellers can bring with them TND 1,000 worth of foodstuffs made in Tunisia, medicines and some other products. Tunisians, on the other hand, can repatriate Libyan made goods, imported goods AND 150 litres of fuel AND the contents of their vehicle’s tank.

It is the later that has no doubt incensed Sanalla. It is a well-known fact that Tunisian fuel smugglers living in the border region have had huge fuel tanks installed in their vehicles and spend all their days crisscrossing the border and refuelling at the nearest Libyan petrol station to the Tunisian border.

In fact, there is a whole Libyan and Tunisian community that has mushroomed in size after the 2011 revolution, that dedicates its daily life to fuel smuggling as its main source of income. It is this difficult to resist tide of fuel smugglers, now including armed  that has led to increased calls to remove Libyan fuel subsidies in exchange for cash payments directly into Libyans’ bank accounts. 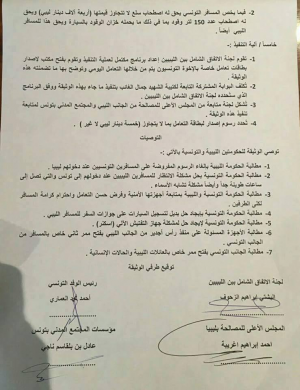 (2/2) The local agreement is not signed or stamped by any official body (Source: social media).

It is worth noting, however, that at this early stage it is not clear how much legal force, if any, the said agreement carries. It is not sanctioned by any official stamp from either the Tunisian or Libyan state, let alone from any Municipality from the western region.

At the AGM, Sanalla went on to review the security breaches committed by the Western PFG’s Naser company led by Mohamed Kashlaf. Sanalla accused it of being responsible for smuggling fuel abroad, from Zawia refinery, specified for the local market. He also accused the Naser company of Petroleum Facilities Guards of unspecified criminal practices.

He branded the Naser company as hoodlums engaged in internationally organized crimes and economic crimes which cause losses of hundreds of millions of hard currency per month for the Libyan Treasury.

This lost state revenue, continued Sanalla, could have been used for reconstruction, the building of hospitals, schools, roads, the digging of water wells, the improvement of the power grid or improving communications all in order to improve citizens’ living standards at a time when the Libyan state is suffering a severe financial crisis, concluded the NOC chairman.

It will be recalled that the PFG are the official state security body charged with protecting Libya’s oil installations and that Ibrahim Jadran, leader of the eastern PFG, had held the Libyan state hostage for about two years by closing down the oil terminals in the eastern oil crescent in an attempt to leverage political and financial power. Jadran was eventually militarily evicted from the oil ports by Hafter and his Libyan National Army.

Sanalla’s public accusation of the head of the Western PFG goes to the heart of the matter of Libya’s current malaise. It exposes the weakness and ineffectiveness of the Serraj-led Presidency Council (PC) and its yet-to-be confirmed Government of National Accord (GNA). It lays bare for all to see how the Serraj ‘‘government’’ has no ability to enforce its will as near as the city of Zawia 50 km west of Tripoli.

If Sanalla’s accusation against the Kashlaf’s Naser company of the Western PFG is substantiated, it puts Sanalla, the Serraj-led PC/GNA as well as the Public Prosecutor’s Office (PPO) and Attorney General in the awkward position of needing to take action.

Sanalla could ask Serraj to revamp the Western PFG and either reform it or refresh its leadership. He could also ask the PPO to press charges. It is notable that he had mentioned in his Sunday Brega statement on the topic that ‘‘The NOC had provided all relevant parties, nationally and internationally, with all available information on fuel smuggling.’’

However, the sad reality is that it is very unlikely that any local police force or local PPO would be able to bring Kashlaf in for any questioning.