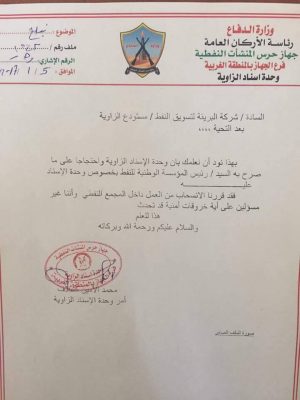 The Nasr brigade of the Western Petroleum Facilities Guard (PFG) is no longer involved in the security of the Zawia refinery, the National Oil Corporation (NOC) confirmed today.

The move comes after NOC chairman, Mustafa Sanalla had yesterday publicly accused the Nasr brigade’s leader, Mohamed Kashlaf, of being complicit in fuel smuggling from the refinery.

Kashlaf’s Nasr PFG brigade was in charge of providing security for the Zawia refinery. The NOC accuses it of colluding in domestic and overseas fuel smuggling from the refinery.

In its statement today, the NOC confirmed that it had received a letter this morning from Kashlaf withdrawing his brigade from Zawia refinery as a result of Sanalla publicly naming him. The NOC statement went on to confirm that the Nasr brigade had indeed withdrawn this afternoon, adding that ‘‘this is what was required’’.

Meanwhile, the Nasr Brigade’s Kashlaf letter said that they were withdrawing from inside the Zawia refinery ‘‘and in protest at what was stated by the NOC chairman regarding the (Nasr) unit…we have decided to withdraw from work inside the petroleum complex and we are not responsible for any security infringements that may occur’’.

The NOC statement, a copy of which was sent directly to Libya Herald by the NOC, went on to reveal that it had initiated security procedures at Zawia refinery and that no security force will be allowed to be present at the refinery without certain conditions.

The NOC said that it will never tolerate anyone who attempts any security incursions of any kind. These would be dealt with as terrorist criminals locally and internationally. The same goes for protestors whatever their legitimate demand because petroleum facilities are not a space for protests.

The statement reported Sanalla as saying that anyone who attempts to slow down or obstruct the work in any way or cause any kind of security incursions of the refinery, irrespective of the excuse or the means used, is nothing but one of the methods of smuggling gangs – motivated by disturbing security and stability.

The statement added that Sanalla stressed that the first victims of subsidized fuel smuggling are the public and that public funds saved in the hundreds of millions in hard currency every month from preventing fuel smuggling can be spent on improving citizens’ standard of living.

This includes reducing the exhaustion of CBL hard currency reserves reflecting positively on the exchange rate. To this end, he called on locals of the western region in general and Zawia specifically to accept the size of the huge social responsibility on them and their responsibility in preventing smuggling operations.

In concluding, Sanalla said that subsidized smuggling of all kinds is denying the rights of other citizens. The solutions for removing subsidised goods and replacing them with cash payments cannot be implemented without a solution to the problem of the (high) exchange rate (of hard currency against the Libyan dinar) and a solution to the problem of cash shortages (at banks) in order to avoid the negative impacts of this policy implementation on citizens.