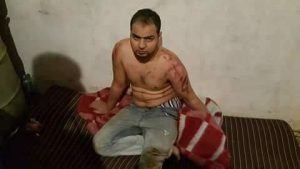 Security forces are fighting terrorists east of Ajdabiya thought to be survivors of yesterday’s coordinated breakout during which it is now known that 21 police and soldiers were killed.

The escape from the invested enclaves of Ganfouda and Sabri came during a power blackout which appears to have been caused deliberately. A GECOL control room engineer has been arrested.

The main terrorist breakout was made by a column of vehicles that headed south towards Suluq.  Libyan National Army spokesman Ahmed Mismari said that in the running battle that followed, involving grounds forces and aircraft, all the terrorist trucks were destroyed, the last of them south of Ajdabiya.

The announcement may have been premature since today there are reports that two soldiers have died and four been wounded in fighting with terrorists in Saunnu to the east of Ajdabiya not far from the B11 inland highway linking the town to Tobruk.

Another military source said that eight armed vehicles had been caught in a village south-east of Ajdabiya. A number of men was captured.  At least one of them, named as Ashraf Al-Ruq, was transferred to Marj.  It is understood that reconnaissance flights in search of further vehicles have been conducted as far west as Harawa.

Details are less clear over the outcome of the two other breakouts, from the north side of Ganfouda and from Sabri. Early reports were that a car bomb failed to detonate in LNA lines when the terrorists broke through.  In Sabri, an armour-plated vehicle was stopped and three terror suspects were killed but others managed to get through.  In what may have been a separate incident at another Sabri checkpoint, suicide bombers were shot down before they detonate their explosive vests, which were thereafter defused.

Later two policemen were shot dead outside Benghazi Medical Centre but the identity and fate of the culprits has not been given.

Benghazi Security Director Salah Huwaidi has insisted that security in the city is under control. A state of emergency is still in force but life on the streets has returned to normal.

Meanwhile the city’s Investigation Department head, Lieutenant-Colonel Ashraf Faydi has  said that a Palestinian woman has been arrested at her home near the port on suspicion of spying. Faydi alleged that the unnamed woman had links to the Hamas party in Palestine and had confessed to filming military movements and reporting them to the terrorists.  Her laptop had been seized.