Drugs, alcohol and pork are preferable to Rada or attacks on BDB: Mufti Ghariani 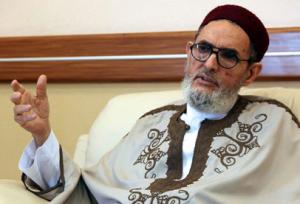 The grand mufti prefers drugs, alcohol or pork to Rada and the attacks on his supporters (Photo: Archives).

The Grand Mufti of Libya said that drugs, alcohol and pork are better for Libya than the actions of Rada, the Special Deterrence Force that is fighting crime in Tripoli. They were also better than attacks on clerics and the choices the people of Libya had made.

Ghariani was speaking on his own satellite TV station Al-Tanasah yesterday.

He criticised Presidency Council/Government of National Accord (PC/GNA) head Faiez Serraj for his statement in support of Rada, adding that Serraj had failed to make statements on other attacks. Ghariani was referring to Serraj’s failure to condemn attacks by Hafter against extremist Islamists in Benghazi, including the Benghazi Defence Brigades (BDB), Ghariani’s followers.

Ghariani called upon Libyan thuwar (“revolutionary”) fighters to unite around a Libyan-Libyan dialogue without foreign interference, criticising the Skhirat Libyan Political Agreement (LPA) and its PC/GNA which, he said, would lead Libya to its downfall.

He called on the thuwar to unite under one command as was the case during the Bunyan Marsous operation in Sirte against ISIS. In their fight they should prioritize their support for the BDB enabling it to defend Benghazi’s residents against Hafter.

He accused Hafter and some Tripoli-based brigades of fighting the entire Libyan people under the pretext of fighting terrorism. Ghariani said Hafter was not fighting ISIS in Benghazi and that after the defeat of its in Sirte Hafter had given it safe passage out of Benghazi to the south so that it could reform its state elsewhere.

The statement by Ghariani also coincided by a statement released yesterday by the Derna Mujahidin Shura Council in which they also condemned Hafter, Serraj and ISIS, and declared their support for the Grand Mufti.