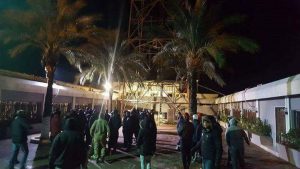 Protesters storm the Al-Madar mobile company HQ in Tripoli demanding a total shut down of service in revenge for long power cuts in the capital (Photo: social media).

Protesters stormed the Al Madar mobile phone company headquarters in the Sidi Masri district of Tripoli yesterday as a counter move to what they say is criminally instigated power cuts forced on the capital.

They demanded that telecommunications be cut across the country in a tit-for-tat move against the groups that shutdown the main gas valve feeding the Zawia power station. The valve shutdown has led to increased 10-12 hour power cuts across the capital, cuts in Misrata and the rest of Libya, as well as a total black out in the south of Libya for three days.

The protest seems to reflect a wider mood and direction Libya is taking, as Libyan society and its social fabric since 2011 seems to be breaking down rather than consolidating – despite a so-called UN-brokered Government of National Accord (GNA) in place since March last year.

The sombre mood has been added to with the heavy rainfall which has flooded roads with blocked drains and the cold weather which has reportedly led to the death of at least one child. The persistent lengthy power cuts and shortage of fuel for heating has led to one whole family suffocating through carbon monoxide poisoning from using charcoal for heating.

Today, it was reported that a Man-made River water reservoir supplying the capital was vandalised near the Bani Walid area, cutting water to the beleaguered capital.

The country has been suffering a lack of services, utilities, and fuel supplies on and off since 2011, but things were expected and supposed to have improved with every succeeding government – and especially with the installation of the PC/GNA.

However, things seem to have taken a turn for the worse in spite of the PC/GNA. The open public attack launched by the National Oil Corporation’s (NOC) chairman Mustafa Sanalla on fuel smugglers and militias allied to them, has led to a head-on confrontation between the very weak Libyan state and opposition forces.

This was further endorsed by the PC/GNA’s threat to: seize any fuel-smuggling vessel approaching the Libyan coast without prior authorization, refer lists of smugglers to the judiciary, issue arrest warrants through Interpol, refer lists of ships implicated in smuggling to international maritime organizations for further action, and ultimately, the GNA warned that it might be forced into closing and declaring a force majeure at fuel-smuggling ports.

In return, the armed militias and their smuggling gangs have made a number of threats to counter the actions of the NOC – the closure of the gas pipeline feeding the Zawia power station being one of them.

If the Madar protestors indeed succeed in shutting down the Madar mobile network, the action could set a dangerous precedent for a series of copycat actions across the country, as every locality decides to take kneejerk revenge actions.

These events go a long way to highlighting the fact that, despite appearances on the surface, Libya has since 2011 been, more or less,  run by armed militias. However, Libya’s politicians who are not fronts or representatives of militias, have been in denial throughout.

Moreover, they have been in deep denial that Libya is run by the rule of the gun and that the vast majority of the unarmed civilian population have been held hostage. Politicians have been putting off the inevitable confrontation between the legitimate civilian rule and militia rule

Meanwhile, the ongoing conflict between western and eastern Libya is in danger of spiralling out of control with the possibility of an all-out war breaking out between GNA aligned forces and Hafter aligned LNA forces in the centre and south of the country – threatening to take the country over the brink and into a destructive civil war.