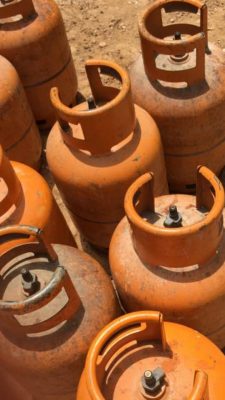 Brega’s Fuel and Gas Crises Committee announced today that armed security will be provided at Tripoli’s main cooking gas cylinder filling and distribution depots. The armed details will escort vehicles transporting gas cylinders to their  retailers around the capital to ensure adequate supplies for consumers.

The move by Brega, the National Oil Corporation’s fuel and gas distribution subsidiary, to use armed security for delivering cooking gas cylinders on to retail distributors comes on the back of black market racketeering in the subsidized gas cylinders.

Gas cylinder retailers have been found closed by Brega inspectors, claiming that they have not been receiving cylinder deliveries from Brega. Brega, however, has accused them of wholesaling their daily gas deliveries on the black market at inflated prices.

As part of a coordinated drive, Brega reported yesterday that on Monday, Council police had closed down a number of gas cylinder retailers for selling their cylinder supplies on the black market.

This is further evidence that the gas cylinder shortage is a ‘‘contrived’’ shortage by those who wish to destabilize security in the country, Brega claimed.

The drive against black market selling by Brega is part of a wider attempt by the National Oil Corporation (NOC) and the Presidency Council/Government of National Accord (PC/GNA) to counter the black market and smuggling of subsidized goods which is leading to contrived shortages of fuel and cooking gas as black market traders take advantage of the weak state and its security apparatus.

The use by the Serraj-led PC/NA of these three particular brigades/militias indicates that these militias are at this time supportive of the Tripoli authorities and that the PC/GNA trusts them or at least considers them ‘’aligned’’.

However, it also underscores the fundamental weakness at the heart of the PC/GNA – as well as the weakness of all Libyan ‘’governments’’ since the February 2011 revolution: their dependence on militias for their existence in the absence of a legitimate national police/army.