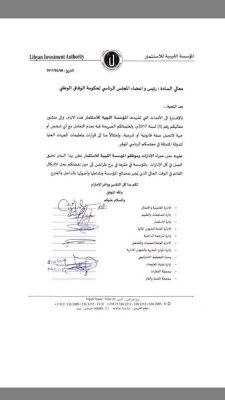 Management and staff at the LIA’s Tripoli Tower HQ announce their walkout until the issue of its chairmanship is resolved (Photo: LIA source).

Management and staff at the Tripoli headquarters of the Libyan Investment Authority (LIA) staged a mass walkout yesterday in protest at the instability and uncertainty caused by the ongoing change in their organization’s chairmanship.

A letter from the head of the LIA’s legal department was sent to the Faiez Serraj-led Presidency Council/Government of National Accord yesterday informing them of the action. The letter referred to the circular sent the day before by the PC/GNA warning all state entities not to deal with ‘‘illegitimate’’ persons or bodies.

One staff member at the Tripoli Tower HQ told the Libya Herald ‘‘Basically, we have refused to work under either of them until the situation is resolved’’.

The walkout comes in response to the arrival of former LIA chairman Abdulmajid Breish last Sunday to reclaim the reins of the LIA by virtue of a court decision. Breish has been fighting a decision to replace him in the courts for a number of years now.

This January court decision overturns the Serraj/PC/GNA appointment of Ali Mohamed Hassan as a ‘’caretaker’’ chairman in August last year.

That appointment of Ali Mohamed Hassan came in response to the resignation of former LIA chairman Hassan Bouhadi after he had had a fallout with the eastern-based Libyan authorities. Bouhadi had been placed under house arrest in Benghazi and forced into holding a board meeting at which Ali Shamekh was appointed as LIA CEO by the eastern-based authorities.

Bouhadi’s resignation had been promptly followed by the resignation of eastern Central Bank of Libya governor Ali Hibri as member of the LIA’s board of trustees in protest at the way the LIA was being run.

Sources in Tripoli have informed this publication that Breish has been busy holding a number of meetings with various parties in the capital an attempt to solidify his position.

It will be recalled that the chairmanship of the LIA is being contested at a London court as well as the ongoing court cases between the LIA and Goldman Sachs and Soc Gen.