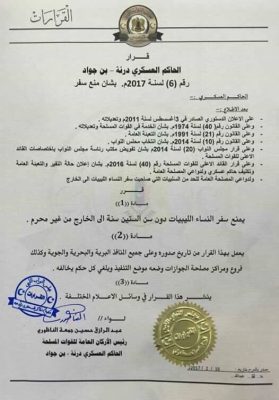 The order from Maj.-Gen. Nazhuri banning single women from travelling

Major-General Abdul Razzaq Al-Nazhouri, the Libyan National Army’s chief of staff and military commander between Ban Jawad and Derna has ordered passport control at Labraq airport to prevent women under 60 years of ago from flying out unless accompanied by a male guardian.

He says it is prevent “the negatives aspects of Libyan women traveling in foreign countries”. Officials at the airport say they are now implementing the order.

It has, however, resulted in surprise and resentment in the east of the country. “People are feeling very angry about this”, said one Benghazi female resident who until has been a firm supporter of the LNA. “Friends say that they did not support the revolution and then LNA for this to happen”, she added.

A male social activist from Benghazi, also till now a Hafter supporter, blamed the field marshal for the move. “It would not have happened without his approval.”

Despite the LNA’s claim that it is fighting Islamists, the move is being seen as a sign of a rapidly growing Islamisation of the LNA itself. Part of this was last month’s invitation from it to the Saudi radical and controversial Salfist cleric Osama Al-Otaibi to visit Libya. Otaibi’s influence is seen as being behind the move.

At a stroke, it shifts Libya into the camp of the most hardline Islamic states worldwide. Even in Saudi Arabia, women can travel by themselves, although they still need to provide evidence of permission from their father, husband, brother or other male member of the family.

Ironically, because Nazhuri’s remit does not extend to Tobruk, staff at the airport there say they have not been given any similar order and so women are travelling normally from there.  They can also cross the Egyptian border by road independently.