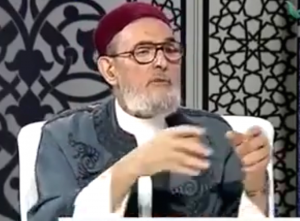 A human rights group has called for Sheikh Sadek Ghariani to be prosecuted in the International Criminal Court for inciting violence and hatred and backing terrorist organisations.

The National Commission for Human Rights in Libya urged the ICC to make a case against the controversial head of Tripoli’s Dar Al-Ifta following his latest broadcast on his Tanasah TV  staton in which he called for support for the Benghazi Defence Brigade and, said the NCHRL, also for Al-Qaeda and Ansar Al-Sharia.

The human rights organisation said that Ghariani risked provoking further violence and civil war in Libya with such comments. The International Criminal Court (IC) should prosecute him.

It is by no means the first time that Ghariani has been criticised for lauding groups regarded as extremist. He has declared a jihad against Khalifa Hafter and the Libyan National Army and said that every family should be prepared to sacrifice a son to defeat them.

ICC chief prosecutor Fatou Bensouda, a former justice minister in the Gambia, has defended herself against criticism that she failed to open any investigations into Libyan war crimes and crimes against humanity, which would include incitement. She has blamed a lack of resources at the ICC and continued in Libya itself. She needed local and international help to mount investigations.

However, last November she told the UN Security Council that this year she intended to open investigations.