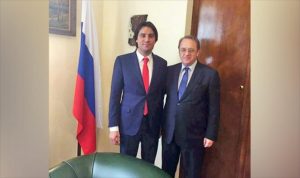 According to the Russian Foreign Ministry “both sides exchanged detailed views on of the developments in Libya”. It also said that Bogdanov and Badri “agreed on the importance to arrange a collective dialogue to be participated by representatives from all political and tribal groups”.

The statement emphasised that putting such steps into action was essential if the Libya crisis was to be brought to an end.

Bogdanov also said Russia was fully behind the ongoing political process in Libya which sought to unify the country and guarantee its sovereignty. In an interview with Russian TV he also disclosed that he had been invited to Washington to meet the Trump administration.

Badri was last in Moscow lobbying for Hafter in September when, according to the Russian media, he discussed the supply of arms for the LNA with Bogdanov. Badri, Libya’s ambassador to Saudi Arabia, denied this, however.

Russia has moved to engage with both the main sides of Libya’s political scene. In the last two week’s its foreign minster Sergei Lavrov hosted Presidency Council member’s Faiez Serraj and Ahmed Maetig.

Serraj has said he hoped Russia would help mediate a meeting between him and the Libyan National Army chief Hafter.