Thinni heads to Cairo in search of military support 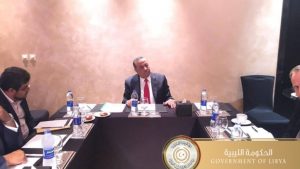 Abdullah Al-Thinni, the head of the Beida-based interim government, has made what his media office has described as an “urgent” visit to Cairo “to galvanise support” for the Libyan National Army (LNA) and explain the seriousness of the situation in the oil crescent.

The move follows the capture ten days ago of Ras Lanuf and Sidra from the LNA by the Benghazi Defence Brigades (BDB) and the LNA’s inability so far to retake them.

According to sources close to the field marshal, he was given the cold shoulder by the Egyptians during his two-day visit to Cairo. He was not able to see Defence Minister Sedki Sobhy and, allegedly, was put in a four-star rather than a five-star hotel.

According to the source, the Egyptian military officials expressed anger that he had failed to finish the battle for Benghazi yet started on another front. They supposedly told him that while they would continue to support him, they would not do so to any great military extent at present.

It is reported, though, that the airstrikes on BDB positions in the oil crescent over the past two days are being carried out by Egyptian rather than LNA planes. This, however, has not been confirmed, nor is it likely to be.

The fact that it is Thinni who is now lobbying in Cairo for the LNA is seen as indicating the extent of the decline in Hafter’s standing with the Egyptians.

While in Cairo, Thinni also had a meeting with Steven Spittaels, the head of the UN’s sanctions committee on Libya, and other members of the body at which he called for the lifting of military sanctions on Libya.  It was needed, he said, so that Libya could fight terrorists which, he added, included the BDB.