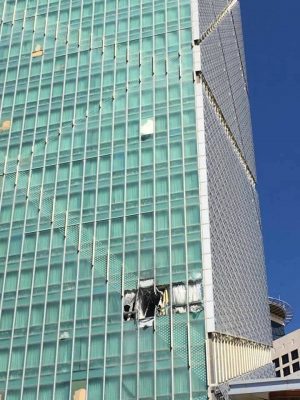 The children’s ward of Tripoli’s Hadba Hospital was hit this evening as clashes moved to the area around the Rixos complex from the capital’s business district shot up earlier in the day. It is not yet known how many people were hurt in the hospital. The missile that hit building started a fire which was brought under control by staff.

The battle is primarily between Tripoli residents backing local militias against hardline Misratan and Amazigh forces allied to Khalifa Ghwell.

Late this evening Jamhouria Street resident Yasin Al-Zaidi told the Libya Herald: “We are hearing the terrific sound of heavy weapons coming from Bab Ben Gashir, next to the Rixos hotel.”

This afternoon missiles thought to be RPGs hit the Waha Oil’s HQ in the Bulayla Taower and also the nearby Marriott Hotel. The windows on the 19th floor of the Waha building were damaged but Salah Mahishi, a technician in the tower told this newspaper that there had been no casualties. It is understood that staff were evacuated immediately the fighting began.

More streets and roads have been blocked this evening including those around Rixos hotel at Bab Ben Ghashir, Hadba central hospital and Hay Damashq. The highway between Zanata district in the east until Ghut Shaal in the west has also been obstructed with barricades.

“Most of the streets leading to our home have been blocked,” said Hadba resident Asma Mousa,  “My brother has only just managed to arrive home after spending ages looking for a route to reach us.”

Many residents have not dared leave their homes. “Clashes sometimes calm down but then they flare up again. Many of our streets are blocked as armed men are spreading out everywhere,” one resident told us by telephone.

The Tripoli Revolutionaries’ Brigade which is playing a prominent role in the battle put out a statement this evening insisting that it is not acting against Misrata but “against criminals, whatever their origins”.

The statement continued: “We deny all reports circulating in the social media that we are targeting properties related to Misratan-based families in Tripoli as we are only taking part in implementing a plan which aims to secure the Hay Andalus and Gurji districts.”

Tomorrow, many schools and governmental offices in Tripoli will be closed because of the deteriorating security situation.

Thus far there has been no comment from the Presidency Council on the collapse in the capital’s security.