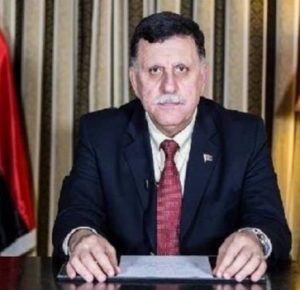 Confusion surrounds events at the Presidency Council’s Busetta naval base HQ this afternoon. There were reports the compound had been raided by a militia and PC chairman Faiez Serraj had been forced to broadcast a statement condemning the treatment of dead militants in Ganfouda, as well as muting his condemnation of Friday’s attack  by gunmen on pro-Hafter demonstrators in Martyrs’ Square.

In any event, a tired-looking Serraj spoke to camera damning the behaviour of victorious Libyan National Army troops in Ganfouda. He also echoed last night’s statement from Misrata protesting that freedom of speech did not mean people could foster strife and division.

He  denounced the anti-Misratan slogans shouted during the demonstrations in Martyrs Square two days ago. Whilst freedom of expression was integral and the shooting on protestors abhorrent, he said that this did not mean inciting hatred between cities was acceptable.

He warned that demonstrations could not be used to bring back the old days of repression, tyranny and dictatorship. In an apparent reference to Hafter’s vow to “liberate” Tripoli and demand for all militias to quit the capital, he said that Libya could not return to being under the rule of one man. He also insisted that the armed forces should be unified and under civilian command.

This morning, the Misratans said that they would have nothing more to do with the PC until it condemned the anti-Misratan chants of the Martyrs’ Square demonstrators on Friday. Serraj obliged, insisting that turning one city against another was a betrayal of the principles of the 17 February Revolution.

It remains unclear if Serraj made his speech as a result of coercion. There had been reports that the Al-Buni militia from Suq Al-Juma had stormed the Busetta naval base. At one point in the day, the naval base was also said to have been blockaded by angry demonstrators but accompanying photos showed merely a handful of people with a couple of technicals.

Serraj did, however, cancel his appearance tomorrow at the EU Rome conference on the control of migration from Libya.

The State Council met today under the chairmanship of Abdulrahman Sewehli and also condemned the “brutal criminal acts” that had occurred in Ganfouda. It urged the UN and international organisations to investigate the “human rights violations and war crimes” committed by Hafter’s Operation Dignity forces.

Thus far foreign diplomats have remained silent over the apparent war crimes in Ganfouda and leading international human rights organisations such as Human Rights Watch have not yet commented.