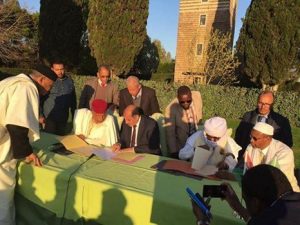 A three-cornered peace deal between the Tebu, Tuareg and Awlad Suleiman tribes has been signed in Rome after months of direct and indirect talks, brokered in part by the Presidency Council .

A much-praised November 2015 Qatari-arranged ceasefire between Tebu and Tuareg in fact broke down almost immediately. Almost a year later the Awlad Suleiman from Sebha and the Tebu were brought to Italy by the Community of Sant’Egidio. The upshot was a commitment to work together to restore mutual trust and stability.  A month later Tebu and Tuareg elders also reached a deal to end their fighting in and around Obari.

In this week’s deal the newly-reconciled three tribes agreed to push for development in the south of Libya and discussed illegal migration. Their three days of talks were mentored by PC member Abdelsalam Kajman said Italy’s Agenzia Nova. The shared concern was that the south had been marginalised under Qaddafi and since the Revolution, too little had been done despite frequent promises of development .

Earlier this month Kajman hosted eleven southern mayors in Tripoli where to the disappointment of his guests, he seemed only interested in border security.

The return of Turkish construction company ENKA to complete the Obari power station where work was abandoned after the revolution, is one of the few bright spots in the region, which has endured long and regular power cuts.