Ghariani calls on Misrata to allow Tawerghans to return home. 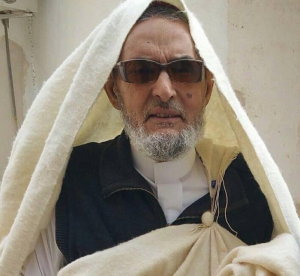 Sheikh Sadek Ghariani has urged the authorities in Misrata to allow the displaced people of Tawergha to finally return home and be released from the “miserable life they are going through”.

However, Ghariani also demanded the Tawerghan people hand over those accused of crimes during the 2011 revolution, so they could stand trial. He said that this would ease the pain inflicted on the innocent .

The controversial cleric who is still recognised as grand mufti by the Presidency Council despite Faiez Serraj saying that he was one of four “spoilers” in Libya and despite having been sacked in  House of Representatives in November 2014, was speaking during his weekly programme on his Tanasuh TV.

Ghariani, who also heads the Dar Al-Ifta (Fatwa House), focused on the “tragedy” and hardship faced by the estimated 40,000 Tawerghan Internally Displaced People (IDPs), spread across Libya. He revealed a number of Dar Al-Ifta members had visited the IDP camps to witness the conditions they lived under.

He also alleged the government of former prime minster Ali Zeidan had ignored plans to build homes for roughly a thousand Tawerghan families on state-owned land. The Sheikh said he had sent the proposals to Zeidan and his ministry of housing, but was snubbed.  He did not say if the homes were to be built back in Tawergha or elsewhere.

Last August, a UN-brokered peace deal was agreed between Misrata municipal council and Tawergha local council. Though it envisaged some compensation to be provided to the Tawerghans, none would be given to aid the rebuilding of homes and buildings damaged during the fighting the deal stated.

In February, a Tawerghan delegation met Beida-based interim Prime Minister Abdullah Al-Thinni to press their case, but little was agreed. The House of Representatives member for the town, Jaballah Al-Shibani, has previously complained over a lack of funding to construct prefabricated houses for IDP’s- a request echoed by Ghariani yesterday.

During the 2011 revolution Tawerghan fighters supported Qaddafi and his offensive against Misrata. Their forces were accused of numerous war crimes including rape, torture and the mutilation of Misratan soldiers’ corpses.