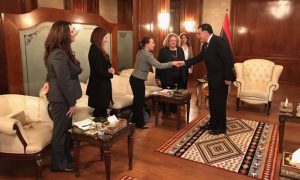 The UN hands over ownership of 10 ambulances for Sirte to the GNA’s Faiez Serraj (Photo: GNA).

The rehabilitation of Sirte continued apace today as the UN handed over the keys to ten ambulances intended for the town to Presidency Council head Faiez Serraj.

It is part of a wider $7.6 million package aimed at rebuilding infrastructure and improving service delivery in Sirte, devastated by fighting last year as the so-called Islamic State was ousted from the town.

UNSMIL deputy envoy Maria do Valle Ribeiro was in Tripoli today to seal the exchange with Serraj.

The package is supported by the Stabilisation Facility for Libya (SFL) a fund devoted to improving local level services in conflict-ridden areas and enhancing mediation efforts.

A total of $32 million has been pledged so far by 12 international donars, run under the auspices of the UNDP. Decisions on where to focus are made by a governing board chaired by a Serraj representative and Ribeiro.

So far Benghazi, Kikla, Obari, Sebha and Sirte are the places that have been targeted by the SFL. Germany has been particularly generous, contributing over US$10 million.

Sirte’s main hospital Ibn Sina, badly damaged by the fighting last year, is being rebuilt with the aid of the SFL. Today, a medical team began the three-day process of sterilising much of the hospital including its intensive care, surgical and neonatal departments.