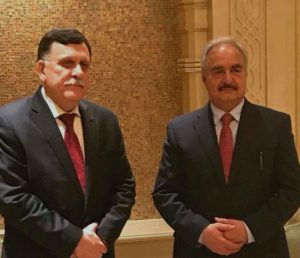 Presidency Council head Faiez Serraj and the head of the Libya National Army, Field Marshal Khalifa Hafter have met in Abu Dhabi today. It is the first time they have do so since meeting in Marj in January last year.

Today’s meeting follows intense pressure on Hafter from governments that have been supporting him – notably the Emiratis, the Egyptians and Russians – to sit down and talk to Serraj.

Efforts by the Egyptians to engineer a meeting in Cairo ended in failure last February when Hafter refused to meet Serraj.

There has so far been no statement as to what was discussed or agreed, if anything.