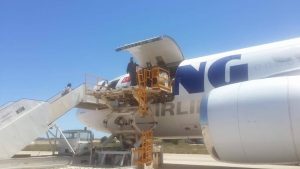 More money from Moscow but downwards  pressure for the dinar  (Photo: LANA)

A further 660 million-worth of dinars printed in Russia has arrived at Labraq, the airbase’s media office announced today. The new LD 20 notes were taken to the parallel Central Bank of Libya’s headquarters in Beida.

The cash is to distributed to banks in the east and south of the country ahead of Ramadan.

The Beida CBL first turned to Russia for new notes just over a year ago and the first batch of a LD 4-billion order, in LD 50 notes, was dispatched at the end of May 2016. There have been subsequent deliveries.

A week ago, the governor of the Beida CBL, Ali Hebri,  indicated that the delivery of the Russian notes was imminent and suggested that, if necessary, more would be ordered.

Bizarrely, he also suggested that the printing of more dinars and the drop in the currency were not related.

With Libyans not trusting the banks to pay out their money when they try to make withdrawals, very few are depositing cash in the banks. Without no cash for withdrawals at the end of the month when salaries are paid into people’s accounts, both the western and the eastern CBLs have been obliged to print ever more amounts of bank notes to meet demand, despite the resulting heavy downward pressure on the dinar’s value.

The dinar in fact rallied on the news of the Khalifa Hafter – Faiez Serraj agreement and hopes of a political breakthrough – from LD 8.50 to the dollar to LD 7.60. But the downward pressure is expected to continue so long as there are no deposits in the banks and more and more dinars are added to the money supply.