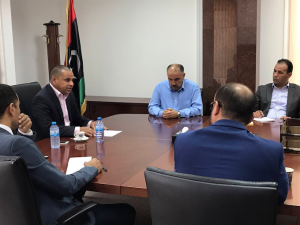 LIA head Ali Mahmoud Hassan back in control at the HQ in Tripoli (Photo: LIA)

The head of the Libyan Investment Authority (LIA) management team appointed by the Presidency Council (PC), Ali Mahmoud Hassan, was back at work today at the LIA headquarters in Tripoli Tower after an enforced absence of three months when he had to operate out of the LIA’s long-term portfolio office in Hay Al-Andalus.

The dislocation was caused when former chairman Abdulmajid Breish moved back into the Tripoli Tower HQ after a court ruling in early February overturned the PC’s appointment of Hassan and the management team. The resulting duplication of management caused staff to walk out in protest.

Today, with Breish unable to exercise any real authority over the LIA because foreign states where the investments are based refused to accept him, it is Hassan who is back in full control.

He started work today by meeting head of departments and announcing the resumption of the 2017 operations plan and a review of all financial commitments owed by the Libyan Investment Authority.

“It is important to reaffirm the values of transparency in all our financial and administrative dealings before all concerned parties”, he declared today, stressing the need for all LIA departments to work harder so as to achieve best results.