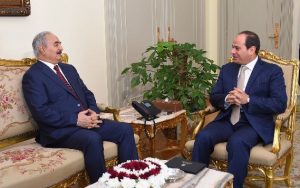 Egypt’s President Abdel Fateh El-Sisi in Cairo talks with Khalifa Hafter today called for the end of the UN-imposed weapons embargo on Libya.

Sisi said this was needed so the Libyan National Army could fight terrorism. He also claimed that militants were being aided with munitions and fighters by “external parties” seeking to interfere in Libya’s affairs.

According to the Egyptian president’s spokesman Alaa Yousef, Sisi also told Hafter that a unified and restored Libyan army was essential.

Both men reportedly said that the Libyan Political Agreement (LPA) had to be made to work through amendments and that it was the only way to allow state institutions to be rebuilt.

No mention was made of rumours that Presidency Council head Faiez Serraj would soon arrive in Cairo for talks with Hafter and potentially hosted by Sisi.

The last occasion the two key players in Libya were in Cairo at the same time Hafter refused to meet Serraj, a decision that reportedly angered Sisi.

However the two did finally hold talks in Abu Dhabi two weeks ago. Sisi was in the UAE at the same time and there were unconfirmed reports that he saw Hafter and Serraj.