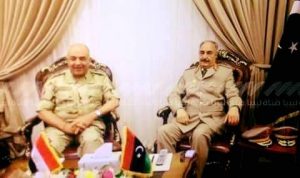 Egypt’s Chief of Staff and head of its Libya file, Lieutenant-General Mahmoud Hijazi, arrived in Benghazi today for talks with Khalifa Hafter and military leaders.

He was greeted at Benina International Airport, which flew its first commercial flight to Egypt today, by his opposite number, Major-General Abdul Razzaq Al-Nazhouri with whom he held brief talks before heading off to the nearby Rajmah military base to meet Hafter.  He was accompanied by Egyptian Director of Military Intelligence Major-General Mohamed Al-Shahat.

Little was revealed about the Hafter-Hejazi talks, although it was reported that the delegation had came to congratulate Hafter on the third anniversary of Operation Dignity.

It comes a day after the celebrations marking the anniversary.

Last week, Hafter was in Cairo to meet with Egyptian President Abdel Fatah El-Sisi where Egypt’s leader called again stressed Egypt’s view that there has to be an end to the UN-imposed weapons embargo to enable an effective fight against terrorism in the country. It would allow stability to return to Libya, he said.