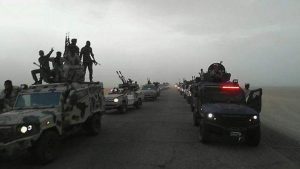 In its response, the LNA’s general command has said its response would be “harsh and strong” in avenging the massacre. Those responsible would be crushed, it declared. It is sending extra units to reinforce the 12th Battalion which is again in control of the base.

The mainly Misratan 13th Battalion (formerly the Third Force) and the Benghazi Defence Brigades together with other units are being held responsible for what is one of the worst atrocities in Libya since the revolution.

Following the massacre, they withdrew.

For their part, HoR members from the south of the country have pinned ultimate responsibility on the Presidency Council (PC) and its defence ministry. It is supposedly in control of the 13th Battalion. They have accused the PC and ministry of violating a truce agreed by PC head Faiez Serraj and LNA chief Khalifa Hafter agreed in Abu Dhabi.

The HoR members have demanded the PC sack its defence minister, Mahdi Al-Barghathi and put him and the forces operating under his control on trial for the slaughter.

Taking a similar line is boycotting PC member Ali Gatrani, who described the perpetrators as “terrorists”. He also blamed controversial grand mufti Sadek Al-Ghariani for inciting people to attack the LNA. He further demanded the international community respond by lifting the ban on arming the LNA.

From the international community so far has come condemnation from UN Special Envoy Martin Kobler and the UK ambassador Peter Millett.

He also called for no reprisals.

“I call upon all parties to condemn this attack and not to allow it to undermine intense efforts to find peaceful political solutions.” he added.

Via his Twitter page, Ambassador Millett said: “Disgusted by attack on Brak Al-Shatti & reports of mass executions. Perpetrators must be brought to justice.”

“Civil war in Libya must be averted. Violence will not solve Libya’s divisions. Dialogue & reconciliation essential,” he added.

So far, there are no precise figures on the number of dead. A figure as 134 has been reported. Others speak of 60 or 75.

One person known to Libya Herald went to the local hospital and started to count the bodies. After reaching 40, he said he could he could stand it any longer and had to leave. The sight of smashed faces, of eyes blown out, so revolted him that he felt he was going to vomit. A second person then asked to do a body count did not even make it to 40. He rushed out to be sick.

Photos of the dead LNA fighters show some with slit throats and others with bullet wounds only to the head – either outstanding marksmanship or more likely a sign of extra-judicial executions.

One of the body counters later said that it was clear that they had not been killed in fighting but had been lined up and executed.