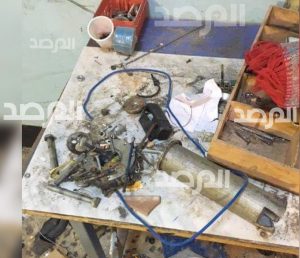 Foreign experts are alleged to have visited a bomb-making factory found in Tripoli’s Hadba prison and closely examined Improvised Explosive Devices (IEDs)  said to have been discovered there.

The nationality of the visitors has not been given but sources are making the connection between the Manchester suicide bomber Sulaiman Abedi and the device he made after returning to the UK from Libya. However, Abedi used a cocktail of commercial chemicals while the IEDs that appear to have been found in Hadba are clearly based on high explosives extracted from shells.

Photos have since been published of a room in an annexe of the prison in which there are shells and mortar rounds in various stages of disassembly and what appear to be electrical circuits for detonation.

Bomb disposal experts are said to have made safe around seventy devices some of which were packed with nails. These are being compared to similar IEDs found in Benghazi.

The prison had been controlled since 2014 by Khaled Al-Sharif, a former member of the Libyan Islamic Fighting Group. After he and his men were ousted, the prisoners were moved, some, including Saadi and Senussi to Fornaj jail and others to Ain-Zara prison. Sharif’s abandoned house was later destroyed by TRB militiamen.