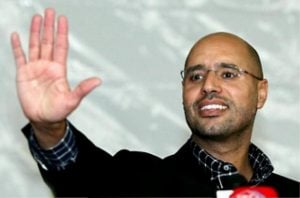 Zintan is said to be in uproar with firing in the streets after it was reported that Saif Al-Islam, Muammar Qaddafi’s son had been released and had left the town.

Al-Ajmal Al-Atiri, commander of Zintan’s Abubakr Al-Siddiq brigade which had been holding the dictator’s son since it captured him fleeing through the desert six years ago, is understood to have confirmed to a local journalist that Saif was freed yesterday and had quit Zintan.

A statement, seemingly from the brigade, has been put out announcing the release. It said that it was responding to the House of Representatives (HoR) amnesty for political prisoners and it called for the liberty of all other such detainees. It added that human rights organisations and the courts should oversee these releases.

There has as yet been no independent confirmation of Saif’s freedom and departure.

Last month, the Zintan military council dismissed as completely false claims by the International Criminal Court chief prosecutor Fateh Bensouda that Saif had survived an assassination attempt and that he had been handed over to it by Al-Atiri’s brigade.

At the end of the month Saif was visited by the Beida government’s under-secretary for justice, Eisa Alsaghir who insisted that he was already a free man. Alsaghir said that in the view of the Thinni government he was at liberty to go where he wanted.

This evening there were reports that Saif had headed variously to Algeria, to Beida and to the south to join Tuareg warlord Ali Kana. Kana’s forces last month took over peacefully the Sharara oil field from their past Misratan allies in the Third Force (now the 13th Battalion).

While it appears that some Zintanis are very angry at Saif’s apparent release, the reaction in Sebha was markedly different with reports of celebratory gunfire in the streets.