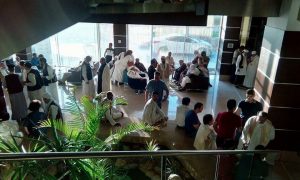 Abdullah Senussi, the Qaddafi regime’s intelligence supremo who was being held at the notorious Hadba prison until it was seized by Haithem Tajouri’s Tripoli Revolutionaries’ Brigade late last month, has been meeting members of his family and leaders of his Magarha tribe at the city’s Mahari Radisson Blu Hotel. He had an Iftar meal with them last night and then met a group of Magarha youth.

He was taken to the hotel two days ago, as were many other Qaddafi regime prisoners previously held at Hadba, including, Saadi Qaddafi and Abuzeid Dourda, the former General Secretary of the General People’s Committee (effectively prime minister) and later Qaddafi’s external intelligence chief.

Yesterday’s iftar meal was organised by Tajouri who now controls hotel  and the source described the presence of Abdullah Senussi and the others at the hotel and the various meetings taking place there as “nothing more than a Haithem show”.

It is not known where they were all held after being taken from Hadba jail last month. Nor is it known if they are now to be held under house arrest at the Radisson Blu or whether this is a temporary stay to allow them to meet their families and friends. Senussi’s family are being accommodated at the hotel, a source who was there last night told the Libya Herald.  Senussi also had a meal with them two nights ago, he added.

According to the source, Abdullah Senussi, Saadi and the others are certainly expected to stay at the very least for another night at the hotel.

There is a heavy security presence at the entrance and in the streets nearby. 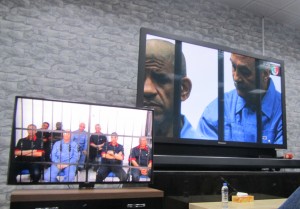 Four years ago, Senussi was said by his doctor to have prostate cancer.

Saif is believed now to be in the south, although there were reports of him two days ago being in Bani Walid.