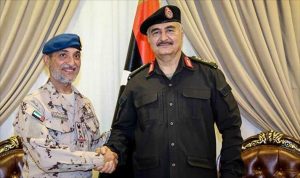 The two men and their staffs met at Hafter’s Rajma headquarters in Benghazi.  The LNA said merely that their meeting came within “the framework of brotherhood and cooperation between Libya and UAE at all levels .”