Hafter is told Benghazi university is still unsafe for students 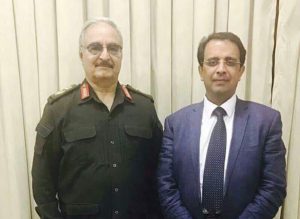 Benghazi university has still not been cleared of mines and boobytraps the university’s president has told armed forces commander-in-chief Khalifa Hafter.

Even though militants were driven out in April 2016, the task of checking through the whole Garayunis campus has still not been completed. De-mining teams have long complained about a lack of equipment and protective gear.

University head Dr Mari Al-Maghrabi saw Hafter yesterday at his Rajmah headquarters to urge a speeding up in the clearance work so the new semester can start in September. The pro-Beida LANA reported that Hafter agreed that the removal of unexploded ordinance was a priority.

The explosives teams not only face conventional buried mines but have come across improvised explosive devices that would be triggered when doors were opened or floorboards stepped on. Others have been disguised as rocks or linked to bicycles, the latter a ploy also used by IS terrorists in Sirte.