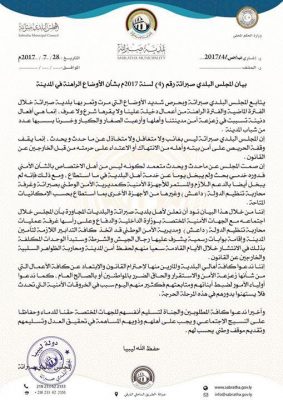 Sabratha municipal council has reacted angrily to a small pro-Khalifa Hafter demonstration in the town yesterday by a group of young people, demanding  that those who took part hand themselves in.

It added that it had met with officials from the ministries of interior and defence as well as with other security bodies and that, as a result, units would be deployed throughout the town in the next few days days to ensure its safety. It told the protestors to think about the strain they were putting on their families as well as well on the security services which had to still deal with attacks.

The demonstrators had gathered in Sabratha’s main square where a statement praising Hafter and the Libyan National Army (LNA) for liberating Benghazi was read out. Calling on militias to put down their weapons and join the police or army, they were also said to have expressed the hope that the LNA would continue to solve the country’s problems.

A source in the town has claimed that the reason the no action was taken against the demonstrators is that a number of those involved were related to members of the town’s militias and that the authorities feared trouble as a result if they responded with force.

Although Sabratha officially now supports the Presidency Council, it is widely perceived as being in the hands of Islamists. The head of its military council and security directorate, Taher Al-Ghrabli, said to have been a supporter of Libyan Islamic Fighting Group, was included in the “terror” list drawn up by the House of Representatives’ Defence and National Security Committee last month. It contained the names of 76 Libyans and nine organisations it accused of being involved in terrorism or supporting Qatar.