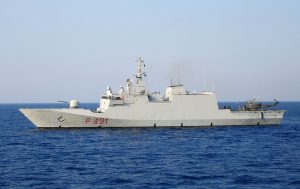 Italy’s parliament has voted to allow its navy into Libya’s waters to help the Libyan coastguard. It agreed to the dispatch of two vessels.

In response, the House of Represntatives in Tobruk had condemned the development as a violation of Libya’s sovereignty, saying that it did not recognise any agreement between the Presidency Council and Italy on the use of Libyan waters by the Italians. It called on the UN to intervene so as to prevent a crisis with Italy.

For her part, Italian defence minister Roberta Pinotti has insisted that the Italian ships would give only technical support, would not violate Libya’s sovereignty and wuld only go when requested by the Libyan authorities.

“We will provide logistical, technical and operational support for Libyan naval vessels, helping them and supporting them in shared and coordinated actions,” Pinotti told parliament yesterday.

The chamber of deputies, the Italian parliament’s lower house, voted by 328 to 113 in favour. The senate, the upper house, also backed the motion.

There has been confusion – and anger – over whether Presidency Council head Faiez Serraj had invited Italian ships into Libyan waters. He claimed he had not but foreign minister Mohamed Siala said Libya did ask for Italian help inside the country. The Italians have also said they were asked, but have not disclosed who asked them.

Although the vessels are to enter Libyan waters supposedly to help the Libyan coastguard when requested, it is widely believed that their prime task, in fact, is to catch migrants while in Libyan waters and ensure they are sent back to Libya.

Human Rights Watch (HRW) has said that Italy could be implicated in abuses against migrants who as a result are subsequently held in Libya.

“After years of saving lives at sea, Italy is preparing to help Libyan forces who are known to detain people in conditions that expose them to a real risk of torture, sexual violence, and forced labour,” she added.

Amnesty International has agreed claiming Italy was essentially aiding the torture and mistreatment of migrants if they end up in detention camps.

“Rather than sending ships to help save lives and offer protection to desperate refugees and migrants, Italy is planning to deploy warships to push them back to Libya,” said Amnesty International’s Europe Director John Dalhuisen.

The news comes as Italian patrol vessel Commandante Borsini arrived in Tripoli today with a group of experts for a five-day working visit.

“The initiative comes as a continuation of the of the strengthening of technical, combat and training cooperation between the Libyan side, represented by the naval forces, the coastguard and their counterparts from the Italian side,” a Libyan navy statement said.