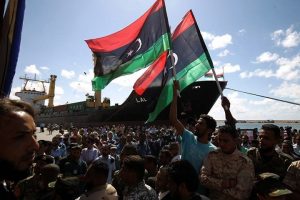 Interim prime minister in the Beida government, Abdullah Thinni, together with Ali Gatrani, the boycotting member of the Presidency Council, were the chief personalities at a ceremony today to mark the reopening of Benghazi port after three years of enforced closure and welcome the arrival of the Greek-owned general cargo vessel Lady Haloum.

A large crowd had assembled at the port to take part in the ceremony following the go-ahead from Major-General Abdul Razzaq Al-Nazhuri, the military governor for the area from Ben Jawad to Derna. He visited it in July to assess its readiness for reopening and lifted the ban on its use on 23 September.

Yesterday, the acting port manager, Hussein Al-Shara who was appointed by Nazhuri while Mustafa Elabbar is away, told the Libya Herald that that the harbour had been checked over by military engineers to confirm that there was no unexploded ordinance and that the harbour pool had likewise been searched and cleared by divers.

Today’s ceremony was also attended by the acting mayor of Benghazi, Abdulrahman Elabbar, together with a number of leading maritime officials and managers of other ports in the eastern region. 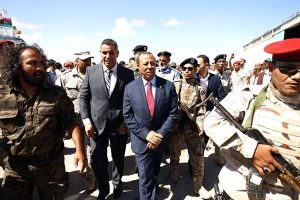