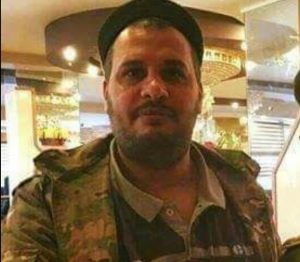 Photograph’s of Yedri’s body in Misrata hospital mortuary showed signs of bruising and foaming at the mouth. Supporters claimed he had been subjected to electric shocks. The cause of death has not yet been determined.

Yedri, whose nickname was “Nahala” (Bee), lost the lower half of his left arm in a previous incident. He had fled Benghazi reportedly last year as LNA forces closed in on militant positions. He had moved to Misrata, from which supplies and reinforcements were being sent by boat via the quay at Libyan Iron and Steel Company (LISCO).

It is understood that Yedri disappeared some weeks ago.