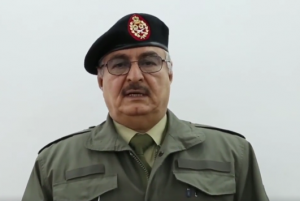 In a swift reaction to last night’s challenge from Government of National Accord (GNA) deputy interior minister Faraj Al-Gaem, Khalifa Hafter has this morning taken over the interior ministry building in Benghazi.

LNA units have also surrounded Berses, a predominantly Awagir area 60 kilometres  to the east of Benghazi on the road to Marj, among whose fellow tribesmen Gaem is reported to have taken refuge.

An officer in the LNA’s 106 Brigade, Lieutenant Mutaz Madi is said to have been killed in fighting at Berses. Two other LNA soldiers have been injured, possibly in the takeover of the interior ministry building in Budzira.

It was a mortar attack  yesterday afternoon on that same building which appears to have triggered Gaem’s ‘phone call to 218 TV in which he demanded that Hafter should cede control of the armed forces to Saiqa Special Forces commander Wanis Bukhamada and leave Benghazi with his sons.

A Saiqa spokesman said last night that Bukhamada did not wish to be involved in the dispute.