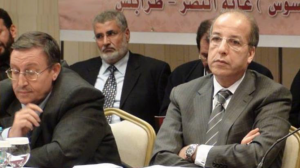 Faiez Serraj, the head of the Presidency Council (PC) has called on the governor of the Central Bank of Libya (CBL) in Tripoli, Saddek Elkaber, and the head of the Beida-based parallel CBL, Ali Al-Hibri, to unite the two organisations.

Calling on them to put aside personal and political differences and look to the national interest, he has called on them meet with him next week and take steps to unify the CBL, deal with the liquidity crisis, and address the issue of the dinar exchange rate.

In a statement today, he said other countries had gone through economic crises but had managed to deal with them and he was confident that Libya could do so as well.

Somewhat surprisingly, Hibri, who last weekend called for the dinar to be devalued to LD 6 to the dollar, has embraced Serraj’s move.

”We are at your disposal and in the service of the homeland and the citizens,” he has said. The members of the board of directors will not hesitate to hold an extraordinary session under your presidency at the time you deem appropriate to take the necessary measures that will correct the situation and respect the will of the citizens who suffer in so many ways because of the absence of stability of the homeland.”

So far there has been so reaction from Elkaber.