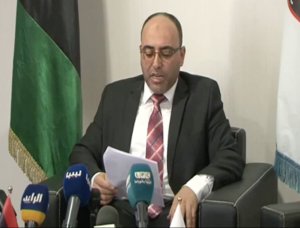 The mayor of Misrata, Mohamed Eshtewi, has been assassinated.

He was kidnapped just before sunset as he was being driven home from the airport after arriving back from Istanbul with a delegation that included numerous other local officials. He was with his brother, Ahmed, and their driver when their car was attacked as it stopped at traffic lights on the airport road. He was seized and his brother shot in the head.

Ahmed Eshtewi is said to be in a serious but stable condition in the Misrata Central Hospital’s intensive care unit.

The killers have not yet been identified. However, fingers are already being pointed at militant revolutionaries and Islamists in the city. Led by Ibrahim Ben Rajeb, the pro-Islamist head of Misrata Military Council, they had on several occasions tried to force Eshtewi to resign because of his support for the Libyan Political Agreement and the Presidency Council and his willingness to reach out to the east of the country.

In May, armed hardliners briefly forced his resignation, although that was retracted shortly afterwards.

Late this evening there were unconfirmed reports that the headquarters of the military council had been attacked.

One senior local official who did not want to be identified has, however, discounted the idea that the hardliners were responsible.

“They have been trying to remove him for months. But killing him is not their style,” he told the Libya Herald. He suggested that it could be Qaddafi or Hafter supporters. “And don’t rule out Daesh [the Islamic State],” he added. All three, he said, would benefit from Eshtewi’s death.

Social media has erupted in condemnation at the killing. Many saw Eshtewi as a good man attempting to reconcile moderate and hardline elements in the city, as well as between Misrata and the east of the country.