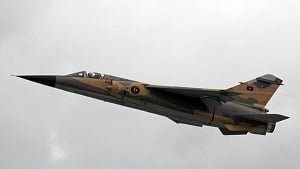 The LNA Air Force has carried out its first airstrikes against Chadian opposition forces in the south of Libya (Photo: Archives).

The Hafter-led Libyan National Army (LNA) announced the start of its “law enforcement” operation in the south of Libya as its 10-day ultimatum given to “Foreigners” and “Africans” to leave Libya ended yesterday.

In its first operation, the LNA reported that it had targeted ten armed vehicles allegedly belonging to Chadian opposition militias yesterday evening south of the Harouj (Harouge) mountains in the middle of the Libyan desert.

Chadian opposition militias have been reported to have been operating in Libya since mid-2014.

On Sunday night, an LNA MI-35 helicopter also engaged in military combat in which another Chadian militia was targeted at an undisclosed location.

It will be recalled that on 1 March UNSMIL expressed its concerns over growing violence and the safety of civilians in Sebha following fighting between Tebus and the Awlad Sulieman tribes.

As reported by the UN Libya Experts Panel report of June 2017, Chadian and Sudanese opposition groups such as FACT, JEM and MM have been operating in Libya for both sides of the Libyan political divide since early 2015.

At the Sahel States Conference on Migration meeting in Niger’s capital Niamey on Friday Libya’s Presidency Council Minster of Foreign Affairs Mohamed Siala called for “international cooperation” to secure Libya’s southern borders and to combat the infiltration of illegal migrants. He warned against the dangers of migrants being exploited by extremist ideologies and against the rise of organised crime.