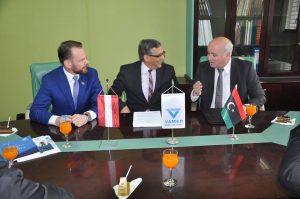 The contract ends a four-year absence for Vamed from Libya.

During the signing ceremony speech, Alageli praised the efforts made by Vamed in overcoming difficulties and in resuming their work at the TMC in order to resume the maintenance of stalled medical equipment and devices that have led to a low level of services at the centre.

Alageli explained that Vamed had the experience and competence to maintain the idle medical equipment at the centre, and to work on replacing non-serviceable devices with modern devices in accordance with the contract.

He also stressed that the signing of the agreement and the resumption of the company’s work came within the framework of joint health cooperation between Libya and Austria in accordance with the agreements signed between the two countries.

It will be recalled that the TMC has had a maintenance contract with the Vamed since it was inaugurated in 1996.

In reality, Libyan health sector sources told Libya Herald that Vamed has had a resident representative in Libya all along – since 1996. They estimate that the lack of a professional world class service contract had cost Libya around US$ 30 million in lost equipment and that there were no other realistic alternatives to signing this maintenance contract with Vamed.

Libya Herald was unable to obtain the value of the maintenance contract.

At the time of publishing, Vamed had not responded to Libya Herald’s invitation to comment.