The Tripoli-based Central Bank of Libya (CBL) has deflected blame for any possible shortages of essential goods, especially basic food items, and price rises that may occur during the month of Ramadan which begins in mid-May.

In a pre-emptive move to avoid criticism during the oncoming fasting month, the CBL accused unnamed ‘‘individuals and entities’’ of trying to increase Libya’s crisis and of attempting to ruin the CBL’s reputation.

In a statement released last week, which continues a series of tit-for-tat accusations of blame between the CBL, the Audit Bureau and the Presidency Council, the CBL noted that there was no justification for the ‘frightening’’ price rises of essential goods with the approach of Ramadan.

It stated that it had warned the Faiez Serraj-led Presidency Council since December 2017 about the dangers of shortages and price hikes which it repeated up until its last letter to Serraj in a 5 April letter.

The Central Bank noted that the Presidency Council had issued decree no. 363 (2018) to import essential goods through Cash-Against-Documents (CAD) facilities in order to resolve the impending crisis. The CBL had agreed to this policy move.

The CBL concluded by saying that there were individuals and entities within the state who wish to increase the crisis in Libya. It stated that they were taking advantage of the needs of citizens in order to achieve personal gains and by putting pressure on the CBL and by muddying its reputation before public opinion.

As a result, the CBL warned that it will take whatever urgent steps are necessary with the Presidency Council in order to solve the crisis and to reduce the burden on citizens.

It will be recalled that last month, the Tripoli-based Audit Bureau requested that the Faiez Serraj Presidency Council to freeze its decision to approve US$ 1.5 bn Cash-Against-Document (CAD) import facilities. It had asked for more time to look into the details of how these approvals were reached and into what it referred to corrupt-looking procedures.

It will also be recalled that the late decision to approve hard currency in the form of Letters of Credit (LCs) or CADs was also criticized last year and the year before.

In April last year, the head of the Tripoli-based Libyan Businessmen Council, Abdalla Fellah, (the only Libyan business council recognized under existing Libyan law), had condemned the Central Bank of Libya for hurriedly opening documentary letters of credit for a number of Libyan companies – in order to import ample supplies of foodstuffs in time for Ramadan.

The feeling is that the process of opening documentary LCs for imports is being delayed every year by design in order to benefit some specific companies able to import foodstuffs at short notice.

The CBL in its above statement is keen to absolve itself from shortages and price rises that might be blamed on it, pointing the finger at the Presidency Council and the Audit Bureau. The Audit Bureau feels that it is its duty to oversee state spending and highlight any possible corruption. And the executive, the Presidency Council, blames the other two bodies for their slow process.

It is unclear who the real culprit is – probably a combination of all three bodies – but ultimately some Libyan import companies are benefiting from having LCs opened at the official exchange rate of LD 1.4 to the dollar (as opposed to LD 6 to the dollar) while the Libyan consumer suffers the burden of shortages and high prices. 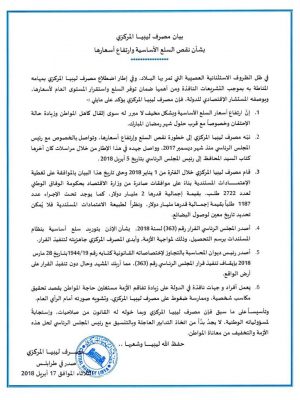