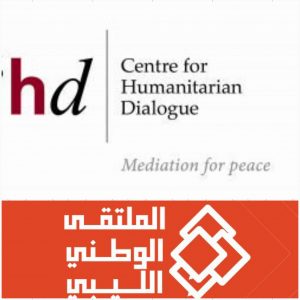 At a press conference held in Tunis on Monday, the Geneva-based Centre for Humanitarian Dialogue (HD) announced that the first phase of the Libyan National Conference process had concluded.

HD said that initial sounding in 27 locations and 42 meetings across Libya with a wide range of actors totalling over 2,500 participants, had found that Libyans wanted:

HD said it plans to organize another 20 meetings across the country to continue its wide canvassing of Libyans.

It will be recalled that HD has been retained by UNSMIL to organize the Libyan National Conference process which UNSMIL hopes will conclude in one final national conference that would reflect the desires of the general Libyan public – as opposed to the political and militia elites.

The plan is part of UNSMIL head Ghassan Salame’s Action Plan approved by the UN General  Assembly in September and by the UN Security Council in October 2017. At the Security Council meeting, Council members had stressed that the Libyan Political Agreement (LPA) signed in Skhirat, Morocco in December 2015 remained the only viable framework to end the country’s political crisis. They had said that they considered that making the agreement work was the key to holding elections and completing Libya’s political transition.

The Action Plan involves Libya’s only internationally recognized parliament, the House of Representatives, approving the draft constitution presented to it by the Constitutional Drafting Authority. The Constitution would set the framework for elections. These are proceded by the National Conference where Libyans political views and desires are aired which then then be followed by elections to be held before the end of 2018.

However, Ghassan Salame’s attempts at pushing through the amendments to the LPA and an amendment to Libya’s Transitional Constitutional Declaration have floundered in the face of resistance from Libya’s entrenched political elites.

Analysts see his drive for elections, even though Libya may not be ready for them for another year, as an attempt to break the stalemate caused by the country’s entrenched and self-interested political and military elites.