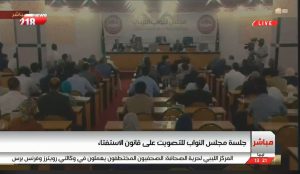 The HoR failed to take a final vote on the constitution referendum bill today. It adjourned its session for two weeks as it awaits legal advice on controversial articles in the bill (Photo: Screen grab from 218 TV).

The House of Representatives (HoR) failed to take a vote on the referendum bill for Libya’s draft permanent constitution in its official session in Tobruk today. It had carried out a reading of the bill in its session yesterday and planned to vote the bill into law in today’s session.

The official spokesperson for the HoR, Abdalla Belheeg, reported that 104 members had attended today’s session, which lasted for about an hour and a half. Some members who had been prevented from entering the building by demonstrators yesterday were able to join today’s session.

Like yesterday, there were frequent interruptions, official and unofficial, to the session, with at one stage two members held back from coming to blows. The bill had a number of controversial if not illegal parts to it.

At yesterday’s session, HoR head, Ageela Saleh, had read out the amended bill after the HoR’s Legal Committee had made amendments to it, with the controversial articles set aside for today’s session.

It was these controversial articles that led to the failure to take a final vote on the bill today. The bill stated that a two-thirds majority with at least 50 percent plus one votes is needed in every one of the three regions (Tripoli, Cyrenaica, Fezzan) of those who voted in order for the constitution to go through.

Members objected that this should be two-thirds of those registered to vote and that the creation of three separate regions and the 50 percent plus one option are all ‘‘unconstitutional’’.

Members also objected to the bill being fast tracked preventing members from voting on each article individually and being forced into voting yes or no for the whole bill.

There was also disagreement on what constituted a quorum for the referendum bill. Some members insisted that an election-related bill needs a quorum of 120 members. Others felt that only 50 percent of members plus one were (101) were needed for a quorum.

The bill also proposed that if the Libyan public rejects the draft constitution, the democratically elected Constitutional Drafting Authority (CDA) would be dissolved and the HoR would select a new 30-strong drafting committee to propose a new draft.

This committee would have three months to propose a new draft constitution to the HoR. The HoR would have 30 days to vote on it and refer it to the High National Election Commission (HNEC).

Members pointed out that the dissolution of the current democratically-elected CDA would be contrary to Libya’s 2011 Transitional Constitutional Declaration (TCD – as amended by the February Committee) and would therefore need a constitutional amendment.

The TCD is Libya’s current temporary constitution – until the new permanent constitution is agreed. The HoR has failed, some say refused, to enact a constitutional amendment since the December 2015 signing of the Skhirat Libyan Political Agreement.

Today’s session was adjourned for two weeks while a new independent Legal Consultative Committee – made up of non-HoR members – looks into those articles of the bill deemed unconstitutional as well as the quorum question. It was decided that its findings would be binding on the HoR.