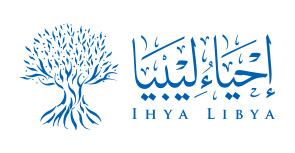 Aref Al-Nayed re-launches his political movement Ihya Libya and announces he will be standing in Libya’s next presidential elections (Logo: Ihya Libya).

Aref Nayed, former Libyan ambassador to the UAE and head of the Libyan Institute for Advanced Studies, has re-launched his political movement, named Ihya Libya (Reviving Libya), to ‘‘rescue Libya from its present chaotic divisions, re-establish the rule of law and order and rebuild the country as a prosperous, democratic state’’.

More importantly, he also announced that he will be standing for Libya’s forthcoming presidential elections.

According to the movement’s press release the launch of the movement comes ‘‘as the country’s parliament, the House of Representatives, has again failed to approve plans for a constitution referendum next month and elections for a new parliament and a president in December’’.

Ihya Libya, the statement said, aims to rally Libyans from across the country – cities, towns and villages in the east, west and south, young and old, men and women, the tribes, the different communities – and get it out of its present calamitous disorder and give Libyans confidence and hope in the future.

“We have been in conflict for seven years, and we have been facing destruction,” Nayed announced at a press conference in Tunis on Wednesday evening. There needed to be a new vision, one that allows Libya to move forward, he said.

In particular there needs to be a future for the country’s young people.  “We need to give hope back to young people so that they do not see the gun as the only opportunity.”

The decision to launch the movement is the result of extensive discussions with representatives from towns, tribes, with women and youth campaigners and many other activists as well as with Libyans outside the country about rebuilding hope and putting Libya back on the path to stability, security, development and economic prosperity.

The movement, Nayed explained, is built on four key principles:

These principles were based on all that has been good in Libya’s past. Libya has been an open country, a hospitable country and a tolerant country.  It is a diverse country and Ihya Libya welcomed that diversity, the statement added.

Nayed called on all Libyans who support these principles to join the movement. Its vision was open to all those who were interested in building the country’s future.  Supporters who wanted to be candidates for election to the House of Representatives or to municipal councils would be supported with training and organisational backing, the statement said.

“Anyone who is convinced by the vision will have our full support as a candidate”, he said.

However, the statement left the most important news to the end adding in just one sentence: ‘‘He himself would be a candidate for presidential elections when they are held’’.

It will be recalled though, that the Ihya movement was initially launched – and as reported by Libya Herald at the time – back in August 2017.

Further information on the movement can be found at www.ihyalibya.com