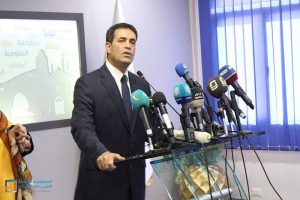 Emad Al-Sayeh, the head of HNEC, got the ball rolling today on the referendum on Libya’s draft permanent constitution (Photo: HNEC).

At a press conference at HNEC’s Tripoli headquarters, Emad Al-Sayeh, HNEC’s head announced that preparations could take up to the middle of January and that the referendum could take place by the end of February.

Sayeh said that the 45-article Referendum Law (Law No.6), which was officially received by HNEC on 29 November from the House of Representatives (HoR), was not perfect.

However, he explained that article 43 allows HNEC to consolidate the law through the law’s implementation regulations.

He said that he will consult widely with the High Judicial Council on the law and it’s regulations, as the law gives the judiciary a major role to play.

The judiciary’s role would come into play especially if the public reject the draft permanent constitution as the reasons for this rejection would have to be compiled and presented to the Constitutional Drafting Authority (CDA). This would be a major task, Al-Sayeh added.

However, he reiterated that HNEC had set four preconditions for holding this referendum: political agreement; a referendum law; financial backing and security.

On political agreement, he said that the referendum law now exists and that his organization will proceed, but he noted that despite the passing of the Referendum Law by the HoR, HNEC had received little overt political support for holding the referendum.

On finance, Al-Sayeh revealed that HNEC was currently in debt by half a million dinars and was awaiting its 2018 Q4 LD 800,000 allocation.

He confirmed that that HNEC had requested LD 40 million from the Faiez Serraj Presidency Council and Government of National Accord. He said that a “no” result in the referendum would require the use of a large number of staff and that there will be 2,000 polling stations used – up from the 1,500 used in previous elections.

But without doubt, the most important precondition for holding the referendum will be security, Al-Sayeh stressed. This is especially so in view of the fatal terror attack on HNEC’s headquarters last May.

Al-Sayeh said that he would need security guarantees across the country for locations, polling stations and staff.

If most these conditions are met by the middle of January, HNEC would, in discussion with the HoR, announce a late February date for holding the referendum.

Al-Sayeh said that this timeframe should allow other organizations such as the media and NGOs to engage in voter awareness.

He hoped that “if” the majority of the Libyan public reject the constitution that it is an informed decision and that they are clear on the precise articles of the constituion that they oppose.

He said that voter registration would be opened in mid-January for a short two-week period in order to top-up the voter register since it was last opened.