All Libya’s airports and border crossings will receive new maintenance 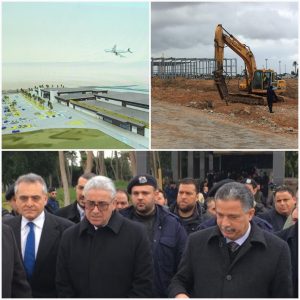 Bashagha was speaking during the press conference held inside the construction site of Tripoli International Airport.

Minister-designate Bashagha explained that the maintenance of Tripoli airport will not be the last and will be followed by maintenance of all airports and border points in the country, stressing the need to pay attention to these facilities as they are the arteries of the Libyan state.

Bashagha was accompanied by Transport Minister Milad Matoug and Italy’s ambassador to Libya Giuseppe Buccino Grimaldi during a progress inspection tour of the latest maintenance work carried out by the Italian company that won the contract to build two passenger terminals.

The Italian construction company also made a powerpoint presentation of the planned works. The works will be on a relatively smaller scale and will not be on the scale of the multi-billion Qaddafi-era airport project which has been abandoned.

The resumption of work at the airport site came after it was halted during the January south Tripoli militia fighting around the greater airport area.

The Interior Ministry has now tasked the Security Directorate of Tripoli International Airport and its security agencies with protecting and securing the airport and developing security plans to secure it.

It will be recalled that Tripoli International Airport was totally destroyed by militia fighting in 2014.

If the Italian company is indeed able to carry out its work at the site uninterrupted by any security problems, it would send a positive message to other foreign contractors wishing to resume projects in Tripoli.

It could act as a projects-security blueprint for the Serraj government for other foregn contractors working on other projects initially in Tripoli and later to rollout across western Libya.

The east of Libya and large parts of central and south Libya are dominated mainly by the Khalifa-Hafter-led Libyan National Army (LNA) and aligned forces.

Equally, if successful, it would be a feather in the cap of Interior Minister-designate Fathi Bashagha and his latest security plans for Tripoli.