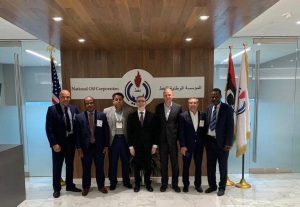 Libya’s National Oil Corporation (NOC) chairman, Mustafa Sanalla, held a series of meetings earlier this week in the US city of Houston as part of the NOC’s US$ 60-billion procurement drive.

The NOC said Sanalla is holding several meetings with leading US companies and counterparts to discuss the technology and expertise needed to achieve the corporation’s stated production target of 2.1 million barrels per day by 2023.

Sanalla met with Caterpillar’s EMEA director, Mr Mikhail Potekhin, to review the company’s activities in Libya, including a US$ 150-million contract for its subsidiary Solar Turbines for power generation equipment, in addition to future potential cooperation and projects with NOC operating companies.

It will be recalled that Sanalla had announced in the US in 2017 that his corporation will open an office in Houston, Texas, as part of its ambitious US$20 billion spending programme to restore the country’s production capacity over the next three years.

Sanalla was speaking at the Transatlantic Economic Forum, hosted by the US Chamber of Commerce and John Hopkins School of Advanced International Studies.

Explaining the rationale for the office, Sanalla had said that ”The Houston office puts America’s world-class equipment manufacturers and oil field service providers at the centre of our purchasing strategy,” said Sanalla. ”And it will locate NOC’s only external office at the heart of the US oil industry. Nobody should underestimate what an important strategic choice this is for us.”