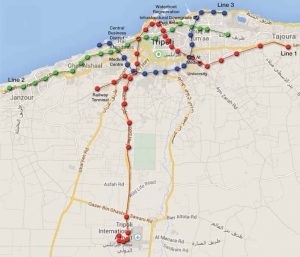 The Serraj government says foreign investors are interested in investing and investing in Tripoli infrastructure projects without any Libyan investment (Photo: BFI).

It was claimed by Minister Issawi that this would be done ‘‘without any Libyan sovereign financial guarantees or spending’’. This claim has already been questioned.

At the announcement yesterday it was revealed that the Serraj administration had reviewed the idea of implementing the Tripoli subway project and the bus network that complements it, with a view of encouraging foreign investors – without the need for sovereign guarantees or commitments from the Libyan government.

During a power point presentation to a large gathered audience of Libyan and foreign concerned parties, the project and its impact on the national economy was explained, and it was claimed that despite Libya’s current circumstances, investors had expressed ‘‘interest and confidence in Libya’s promising future’’.

The power point presentation had included the outline of the project including four underground lines and a bus network. An above ground public bus network and their associated infrastructure projects were also reviewed, including sewage networks, data transmission cables and electricity, in addition to detailing the proposed timetable for implementation.

The Tripoli government said that the project will create about 40,000 new direct jobs and the training of approximately 12,000 trainees in the initial stages.

At the end of the meeting with the foreign partners, it was agreed to form a technical committee from the relevant authorities to address the rest of the technical details and provide a practical roadmap for the implementation of the project.