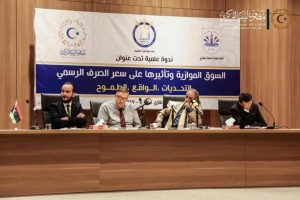 The eastern-based CBL participated in a seminar on the effects of the foreign exchange black-market on the official exchange rate (Photo: eastern CBL).

The eastern-based Central Bank of Libya, represented by its Governor Ali Hibri, participated in a seminar on the foreign exchange parallel/black-market and its impact on the country’s official exchange rate last Saturday.

The seminar was organized by the Students’ Union of the Faculty of Economics at Benghazi University and held at the faculty.

The seminar, which was held to monitor the economy of the city of Benghazi, raised awareness of the risks that were expected to increase the black-market’s excesses on the official foreign exchange market. The seminar warned against controlling the country’s runaway price rises, and called for establishing legal rules to curb black market foreign exchange activity.

Several research papers discussing the danger of the parallel market to the official exchange rate and how to develop solutions to this were presented during the seminar.

Eastern Central Bank of Libya Governor Hibri, also presented a paper on the parallel market and their impact on the official exchange rate and how the central bank has offered some solutions to this.

The seminar was attended by officials of the eastern Interim Libyan Government and several researchers, academics and students of Benghazi University’s Faculty of Economics.