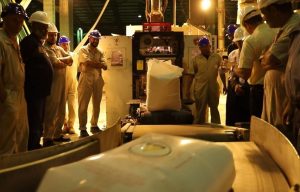 It reported that its first production line started at full production capacity, estimated at about 240 tons per day at a rate of 80,000 tons per year. The packaging of production into bags also started.

In a congratulatory telephone message, National Oil Corporation (NOC) chairman Mustafa Sanalla congratulated employees of the company for what he referred to as an impressive achievement and praised all their efforts in order to reach this historic and important moment defying many obstacles.