UPDATE: Mitiga airport to reopen within two weeks – ‘‘without any military presence’’ 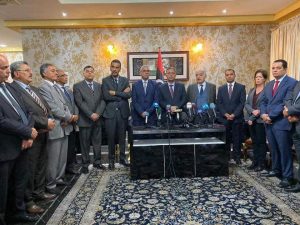 At a press conference at Mitiga airport yesterday, Serraj’s Interior Minister declared that the airport will reopen soon without any military presence (Photo: PC/GNA).

The Interior Ministry of the Internationally recognized Libyan government in Tripoli, headed by Faiez Serraj, announced yesterday that Mitiga airport will be reopening ”within two weeks” – and without any military presence.

The announcement came during a press conference held yesterday at Mitiga airport by UNSMIL head Ghassan Salame, Serraj’s Interior Minister, Fathi Bashagha, the Minister of Transport and the Deputy Head of the Internal Security agency.

Bashagha said Mitiga will be opened ‘‘in cooperation with the UNSMIL’’ and stressed that the airport is an important and vital facility that serves all Libyans as it is the most widely used international port in the western region.

Meanwhile, the Ministry of Transport reported that the airport will reopen gradually within two weeks to allow airliners to transfer their operations back from Misrata airport and for upgrading work on Mitiga’s passenger terminals and carpark to be completed.

The announcement will come as good news for many Libyans living in the western region – as well as the international community. Mitiga has been closed to all flights since the beginning of September – with all its flights diverted to the smaller Misrata airport, a two-and-a-half hour drive east of Tripoli.

It was closed due to repeated airstrikes – attributed to the pro-Khalifa Hafter forces – and it continued to be the subject of strikes until last week.

The pro Hafter forces have insisted that the forces defending Tripoli have been using the sprawling airport complex, which has always historically had a dual military-civilian use – as a base for military drone flights.

The Tripoli side have denied using the airport for military purposes during their battle with Hafter.

Update on 31 October: Mitiga is expected to reopen ”within two weeks”.