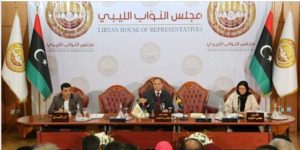 In its session today, the HoR cut relations with Turkey and annulled the Libyan-Turkish security and military agreement as well as withdrawing recognition of the LPA and the Faiez Serraj government (Photo: HoR).

Libya’s internationally recognized parliament, the House of Representatives (HoR), usually based in Tobruk, held an emergency session in Benghazi today specifically to discuss Libyan Turkish relations following the approval by Turkey’s parliament of a bill allowing the Recep Erdogan government to send troops to Libya.

This came in response to a request by the internationally recognized Faiez Serraj government based in Tripoli.

The official spokesperson for the HoR reported that in today’s rowdy session the HoR:

The HoR session involved about 50 members which does not constitute a quorum.